One of my unofficial New Year’s resolutions is to read more books. I’m ashamed to admit that I spent too much time mindlessly scrolling through Reddit comments in the past year. What once started off as a way to spend time in a line or the bathroom has morphed into a pastime. And by “pastime,” I mean that Reddit became a default state of my being.

Worst of all, when I feel like I spent enough time scrolling the site, I’ll close it and open it back up again. I’m concerned that this situation is too similar to the definition of insanity according to this mis-attribution to Einstein.

If I’m doing something I don’t enjoy, I like to ask myself: is this activity adding value to my life? If so, I keep doing it. Some positive answers might include:

More often than not, I say: no, this does not add value to my life. In this case, I simply quit the activity.

When it comes to Reddit comments, I can’t say that their positives outweigh the negatives. When the comments aren’t overly political or unnecessarily offensive, they can be informative or funny. But lately, I’m lucky if I get a single through-the-nose chuckle in a week. And that’s weak.

Ultimately, I asked myself: why read terrible (redundant, I know) internet comments when I can read books instead?

On fateful day at a bookstore, a staff-picked title caught my eye. Soon I Will Be Invincible stood out in bold letters. With a title like that, I knew I had to read it. Who doesn’t want to be invincible?

By the way, you can accurately judge a bookstore by its staff picks (or lack thereof).

Soon I Will Be Invincible (2007) by Austin Grossman gives readers a unique, behind-the-mask account of life with superpowers. It features an all-original cast of heroes similar to those in the DC and Marvel universes. In fact, the heroes we already know, like Superman or Batman, serve as an archetype for the heroes in this book.

The main plot is a standard comic book story arc: a villain wants to take over the world and the heroes must stop him. Grossman uses this generic plot as a vehicle to tell readers the real story: what is going on in the heads of superpeople? Whether it’s by design or by accident, this narrative subverts as many tropes as it uses which kept me on my toes as I turned each page.

This book fits solidly in the Good-Not-Great category (3.5 out of 5 stars). Grossman puts forth an ambitious effort to build an original superhero/comic book world entirely in prose. Not only do we get to read the story from a first-person superpowered perspective, Grossman alternates chapters between a female hero and a male villain.

Although the dual perspective is an interesting concept, I found the voice of each main character, Dr. Impossible and Fatale, to be somewhat similar. The former is a supervillain genius and the latter is a superhero cyborg; each character should have a clear, distinct voice. A few times, I had to the start of each chapter to remind myself which viewpoint I was reading. This mostly happened when I picked up the book after a break, so this one is probably on me.

Throughout his narrative, Dr. Impossible [repeatedly] tells us he’s a genius and demonstrates this through his countless inventions. However, his thoughts and his logic don’t strike me as “genius” at all. Perhaps this is his weakness? His voice may humanize him to the reader, but it detracts from his main superpower.

Fatale is a cyborg who relies on her computer systems primarily for combat. Otherwise, she sounds like a regular person, which is clearly Grossman’s intent with this character. I actually have no issue with her narrative and found myself more interested in her storyline than that of Dr. Impossible.

Overall, I recommend this novel if you’re a nerd like me—especially of the superhero persuasion. It’s a fun, quick read and you won’t look at heroes and villains the same way again. Maybe.

If you enjoy a non-traditional take on the superhero genre and you’re a fan of musicals, check out Dr. Horrible’s Sing-Along Blog (2008) starring Neil Patrick Harris, Nathan Fillion, and Felicia Day.

Did I mention that it was created by Joss Whedon? 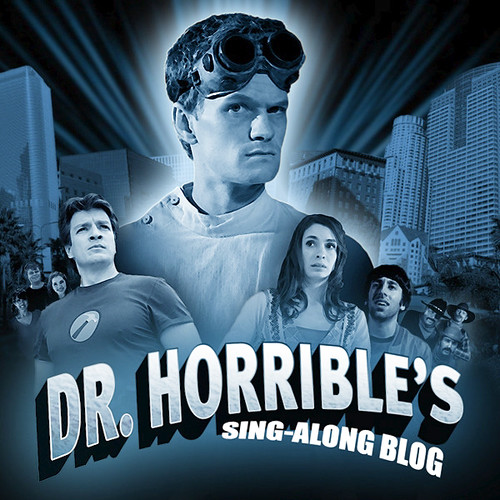 For a dark and gritty take on the world of superherodom, read the Watchmen (1986) graphic novel by Alan Moore. In a world of corrupt leaders and political turmoil, what happens when the people lose trust in their benevolent super-powered protectors?

As the great philosopher Kanye West once said, “No one man should have all that power.”